Cesar Parra and GK Don Cesar Head to the U.S. Developing Horse Championships # 1 In the Rankings 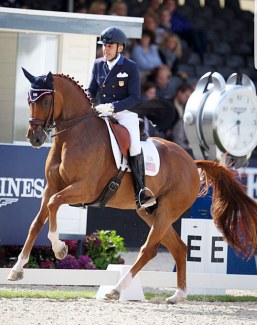 For almost a decade internationally celebrated rider and trainer Dr. Cesar Parra has been qualifying some of the brightest stars in the sport for the U.S. Developing and Young Horse National Championships.

Don Cesar has been on well planned trajectory career path since Dr. Parra discovered him as a 3 year old. “He (Don Cesar) is such a willing and happy horse, a true overachiever,” explains Dr. Parra, “He has achieved success each year as a young horse and last year he made his debut in the Developing Horse Prix St. George and finished as the US Reserve National Champion. This year he is even more solid in his work at this level and I am proud and excited that he is entering this year’s Championship ranking number one”, Dr. Parra added with a pride that has not diminished even a little since his first opportunity to compete in the US Championship nine years ago.

Dr. Parra has his hopes pinned on his top ranked mount Don Cesar this week. Don Cesar has enjoyed an illustrious career coming up through the ranks of the young horse and developing horse program. He finished third as a 5 year old and Reserve Champion as a 6 year old, and then went on to represent the United States in the Young Horse World Championships in Ermelo, Netherlands as a 7 year old. As an 8-year-old he returned to the US National Developing Horse Championships to garner the red Reserve Championship cooler in the Developing Horse Prix St. George.

Dr. Parra and his team have three exceptional horses representing Performance Farms in this year’s National Championships to be held August 20th-25th at the Lamplight Equestrian Center in Wayne, IL. Along with Dr. Parra aboard Don Cesar, both Katie Riley aboard Fabulous Lady and Merita Hagren aboard Jida Selly A will compete in the 5 year old Young Horse Championships.

Coming into the Championships with his horse Don Cesar at the top of the rankings and his own vast experience competing as an Olympian, a Pan American Games Team Gold medalist, a Nations Cup Silver medalist, and two-time FEI World Equestrian Games™ and FEI World Cup™ veteran gives Dr. Parra a confidence boost for this week’s competition, but he is quick to note that “the US Championships are made up of the top of the top when it comes to horses and riders, so it is always very competitive and a fun and exciting rivalry for all the competitors”.

Follow Dr. Parra and all the rising dressage stars he has in training at www.piaffe-performance.com and on Facebook @PiaffePerformance.