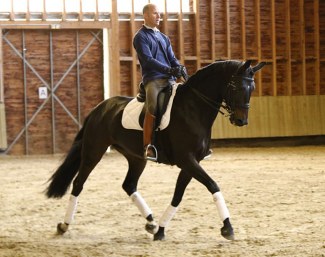 Ultra Diwa is an 11-year old Selle Français mare out of a proven bloodline and schooling at Developing Prix St Georges horse level. She has been slowly and carefully trained up the levels and was never overasked.  This dark bay mare has forward go and power and talent for collection.

She is sired by Sandreo, son of the famous Sandro Hit, who is a guaranty for dressage ability. Sandreo also sired a participant at the 2018 World Eventing Championships. Her dam Diplomat Duwa was successful up to Grand Prix in France under the show name Josephine, ridden by the former French Champion Dominique d’Esmé. Her dam is Danish registered but has classical Hanoverian blood. The grand dam produced two successful eventing horses that were exported as young horses.

Ulta Diwa was given plenty of time to get reared and got saddle broken at age 4. Always kept in capable hands, she is still owned by her breeder, international dressage judge Bernard Maurel.

After slowly getting started under saddle Ultra Diwa achieved good competition results at young horse level between the age 5 and 7. She arrived at the French National Riding School in Saumur in May 2017 and returned to competition in 2018. She was quite placed in National Amateur 1 level (FEI Juniors riders level / M-level) and became reserve champion in the French Championships for riding teachers organised by the French Equestrian Federation at Lamotte. In March 2019 Ultra Diwa began competing at S1* level (developing Prix St Georges) and placed with 67,50 % at the CDN Le Lion d’Angers during Easter and placed at the CDN Le Mans in May.

Ultra Diwa is totally uncomplicated to handle, groom and transport. She is very easy in the stable. She had never been ill and never needed a vet!

She makes a perfect junior rider's horse or for an adult amateur with feeling, who wishes to establish a long partnership and go far with a horse with excellent potential and very good mentality.

Sadly offered for sale as her rider is leaving the French National Riding School after a 4-year education and her owner is retiring at the end of September, finishing his work in the Cadre noir library.

Located in South East of France