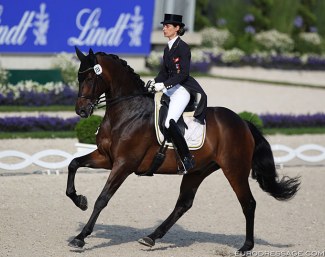 The Swiss equestrian federation has announced the team that will represent Switzerland at the 2019 European Dressage Championships in Rotterdam, The Netherlands, on 20 - 25 August 2019.

The dressage selection committee of the Swiss Federation made their final decision after last weekend's 2019 CDIO Aachen , where only one Swiss rider competed, the brand new 2019 Swiss GP champion Brigit Wientzek-Pläge, and the 2019 CDI Deauville, where Estelle Wettstein had her first international start since the 2018 World Equestrian Games in Tryon almost a year ago.

Chef d'equipe Geneviève Pfister and team vet Christoph Kühnle had discussed the show season with Wettstein, who only started the mare for the first time at the Swiss Nationals in June.

Selected for Rotterdam are:

The reserve is Caroline Häcki with Rigoletto Royal CH.