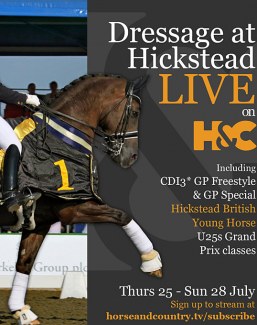 For all dressage fans and supporters this year’s Dressage at Hickstead will be live streamed by Horse & Country. Hickstead International Dressage is now a major fixture on the calendar bringing world class riders together to compete at the historic Sussex venue.

Horse & Country is live streaming the competitions from the International Arena (Dressage) at Hickstead from July 25 to 28 and will include a host of classes over the four days.

Subscribers can watch the live stream on Horse & Country exclusively on horseandcountry.tv

From 2* Small Tour to Grand Prix and Grand Prix Special classes, action looks set to be of the highest calibre throughout the event.

Said Horse & Country Director of Content, Jonathan Rippon: “We are delighted to be live streaming from Dressage at Hickstead for the first time. Offering regular live streaming, at the highest level, from fantastic shows and events around the world is very important to Horse & Country. The success is demonstrated in the number of equestrian fans now subscribing to the platform."

He continued:  “Subscription numbers are growing rapidly with the live streaming proving hugely popular and we have far-reaching plans to cover many more major events over the next few months.”