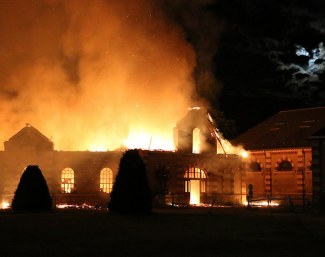 A fire in the night of 11 to 12 July 2019 has wiped away a part of the stable building at the French National Stud in Saint-Lô.

The local fire brigade with 75 firemen extinguished the fire by the morning but are still on the scene for surveillance and damage control.

2000 square meters,  which is half of the entire stable building, were destroyed.

The building housed 24 horses at the time of the fire. All were evacuated on time and no horses sustained injuries.

The stables were built in the 19th century and are considered historical monuments. They were destructed in World War II but rebuilt in identical style. The roof had a wooden construction.

According to the mayor of Saint-Lô, François Brière, they suspect that the fourage stocked in the stables caught fire because of fermentation connected to the humidity.

In 2013-2014 the French state sold the national studs to private investors, including Saint-Lô.