CDIO Aachen Drops Under 25 Division for 2019 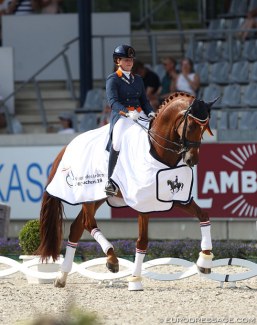 The CDIO Aachen, the biggest and most prestigious international horse show on the planet, will not be including an Under 25 division into its dressage program this year.

Aachen hosted the inaugural Under 25 division for young Grand Prix riders for the first time in 2010. The division was then won by Belgian Julie de Deken on Fazzino, who went on to became a Belgian team rider at the 2014 World Equestrian Games.

Since then the CDIO-Under 25 has been one of the most prolific shows for young GP riders to compete at. Aachen would only invite the best Under 25 riders from Europe as well as the U.S.A. to compete in their classes.

"We decided not to host an Under 25 this year because the week after the CHIO Aachen it's the European Under 25 Championships in Italy. The best horses won't come to Aachen," Aachen show organizer Frank Kemperman told Eurodressage. "As of 2020 the Under 25 division is back on the planning."