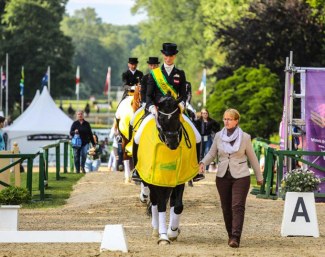 The Almased Dressage Amateurs competition tour for international amateur dressage riders is ready to roll with the first of five legs kicking off in Mannheim, Germany, on 3 - 7 May 2019.

The schedule for Mannheim show is online and there are still spots open for a few lucky amateur riders.

"We are looking forward to the second year of our Almased Dressage Amateur tournament. Both Denmark, Luxembourg and Germany had the pleasure of welcoming happy amateur riders at some of the most spectacular international shows in 2018," said show organizer Jens Trabjerg. "Hopefully we will see even more new faces in the tournament during our 2019 tour. If you want to compete this year, you will have to enter as soon as you can, as we work on a for “first come, first served" basis."

Almased Dressage Amateurs is the first ever international amateur’s dressage tournament in Europe. Initiated in 2018 the tournament is expected to be very sought after during its second year.

"The success of our circuit is the result of this being a completely new opportunity for the amateurs. For the first time ever, we enabled amateur riders to compete at spectacular shows, where they had some great and unforgettable experiences. We have made some changes in order to comply with the feedback and observations we got and made during the tournaments first year," Trabjerg explained.

Based on the experiences and feedback from the first year of the circuit, the team behind Almased Dressage Amateurs have changed the initial Bronze, Silver and Gold tours into a Big and Small tour. The Small tour will be Prix St. Georges and Intermediate I, while Big tour will be Intermediate II and Grand Prix.

The 2019 Almased Dressage Amateurs show circuit  will be held at the following five locations in Europe:

You are allowed to participate in the Almased Dressage Amateurs if you are 26 or older and not listed on FEI’s World Ranking List for dressage riders.

A maximum of 24 equestrians are allowed to compete at every show and each rider is allowed to bring a maximum of three horses (max. 2 in each division).

You enter through your own national federation and the FEI system.