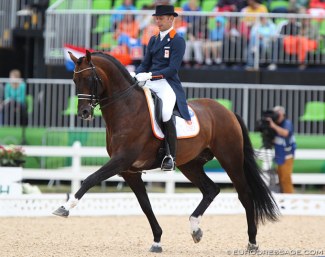 Johnson, the 2015 European Championship team gold and Kur bronze medal winner, will be officially retired from sport in a special ceremony during the 2019 KWPN Stallion Licensing in 's Hertogenbosch on 1 February 2019.

The 17-year old Johnson is bred by Piet van de Vleuten and was originally named Verdi. He is by Jazz x Flemmingh

Johnson sold as a foal to Team Nijhoff, who first presented him for licensing at the 2004 Oldenburg Stallion Licensing in Vechta. He was accepted there and got baptized Johnson as his name had to start with the first letter of the sire.

Nijhoff then took him to the 2005 KWPN Licensing, where Johnson became the licensing champion.

Hans Peter Minderhoud took on the ride when Johnson was a 4-year old. They were second in the 2006 Pavo Cup Finals and won the 2008 KWPN Stallion competition.

The pair made its international show debut at Grand Prix level at the 2013 CDI Roosendaal. They competed at the 2014 World Cup Finals in Lyon, where they were 8th. They were 14th in the freestyle at the 2014 World Equestrian Games in Caen, France

Their career highlight was at the 2015 European Dressage Championships in Aachen, where they won the team gold and individual kur bronze medal. After a long break from the show ring due to injury, Johnson returned in June 2016 to win the CDIO Rotterdam Grand Prix. They went on to represent The Netherlands at the 2016 Olympic Games in Rio de Janeiro, where they finished 8th in the Kur.

The pair finished the 2016 show season with one more start in the World Cup qualifier of Lyon in October 2016. It took until the 2017 CDIO Rotterdam for them to come back in Rotterdam in June, where they placed second in the Kur. The horse was withdrawn from the Dutch team for the 2017 European Championships due to an injury. The stallion has not been shown in 2018.

"Johnson is 17 now and has done a European Championhip, World Championships and an Olympics. We believe he's done enough and that he can shift down a gear. Hopefully he'll stay fit for a long time without the pressure from shows and championships. He has meant a lot to me. We did everything from the stallion competition at L-level up to the Olympics. I got my first individual medal with him at the Europeans."

Gaston Glock secured co-ownership of the stallion for Minderhoud to retain the ride. The horse has a special place in Hans Peter's heart.

"He fit me well and I think that together we were a nice combination," said Hans Peter. "His movements and his expression made him special. When he competed at top level I thought he was the prettiest horse in the whole field, and I think many agree with me. All eyes were on him. Johnson is a real king."