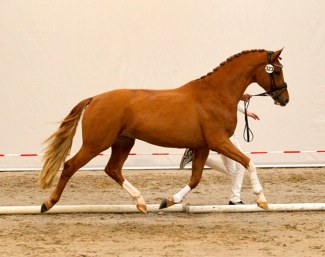 The 2.5 year old colt Le Charmeur became the best seller of the first KWPN Online Colt Auction which started on 17 December and concluded on Thursday 20 December 2018.

The stallions offered for sale had all appeared at the pre-selection days (so first phase) of the 2019 KWPN StallioN licensing.

Fourteen colts were offered for sale and six of them sold for 10,000 euro or more.

The second most expensive colt was Lamourdale H (by Glamourdale x Jazz) which found new owners in Belgium for 18,500 euro, but the stallion will stay in training with Gert-Jan van Olst in Holland.

The most expensive jumper colt in this online auction was Lovejoy JK SR (by Hotspot) which sold for 12,000 euro.

The average price for a colt at this auction was 10.789 euro. Little publicity was given to this auction, which might explain the lower prices for talented colts.