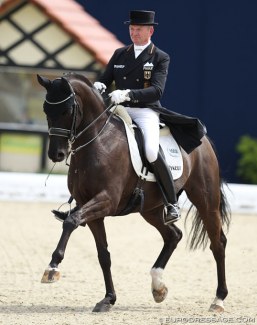 Chrysler is a 2010 Bavarian bred gelding by Christ x Sandro Hit x Donnerhall. He is bred by Johann Göth.

He was initially trained by Hungarian based Ukrainian rider Pavline Revesz. She competed him once in a Bundeschampionate qualifier in Neu-Anspach in August 2015.

Hubertus Schmidt originally scouted the horse for his Indian student Nadia Haridass, but ended up buying him himself together with horse dealer Arnold Winter.

Schmidt made his show debut on Chrysler in the Louisdor Cup Developing Grand Prix horse qualifier in Hagen, Germany, in April 2018. The pair finished second in the qualifier. Schmidt and Chrysler also competed in a short Grand Prix test at Hof Bettenrode, where they were second again.

The previous high performance horse Ros owned was Warbeau (by Wolkenstein II x Matcho), which Swiss Hans Staub competed at the 2011 European Championships and 2014 World Equestrian Games. Ros is also known as the owner of and rider of dressage horses Lancaster, Woodland Pole, Tanirma and Ro-lex.