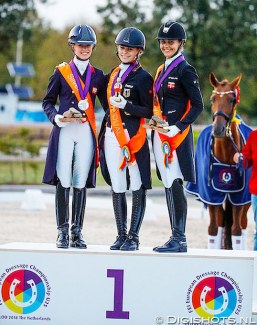 This is Becks' first time on the German Under 25 team after having represented her country at the 2016 European Young Riders Championships in Oliva Nova, Spain, on the same horse. The 20-year old was dumb founded about her success in Exloo.

"I can't describe it in words. When someone would have told me in April I would be a double European gold medal winner, I wouldn't have believed it," said Becks. "My horse really worked with me today and we both tried to give it our best. And it worked. I knew that today we couldn't make any mistake. I had to wait a long time for the last riders to go. It was very nerve wracking and it became really tight in scary in the end. But now I'm simply happy, that my score worked for a second gold medal."

British Charlotte Fry and her coach Anne van Olst's 10-year old KWPN gelding Dark Legend (by Zucchero x Tango) were the winners of the team championship test, but in the Short Grand Prix they were second for silver. The pair posted a score of 75.308% on the board, but the judges were in disagreement as two had her round 72-73% and one judge even up to 77.821%.

"I'm so proud of my superstar Dark Legend," said Fry after winning silver. "He was just incredible for a personal best of 75%."

Denmark's Victoria Vallentin steered Sam Duckworth's 12-year old Oldenburg stallion Ludwig der Sonnenkonig (by London Swing x Liberator) to bronze on a 74% earning round. Her individual marks were all quite close together. Vallentin is coached by her father Soren and they are based at Andreas Helgstrand's sales and training centre in Vodskov, Denmark.

"Denise didn't make mistakes, her piaffe and passage went well. The final result was a bit disappointing even though she had to deal with big judging differences," Dutch team trainer Alex van Silfhout commented. "Today's top five are all very complete horses with extra movement and who are sharp on the aids. I hope for a podium place for one of the Dutch riders (in the kur), but it's the shape of the day that decides. It won't be any problem with Boston's fitness who was fresh as a monkey at the second vet check."

German U25 team trainer Sebastian Heinze also rung in on the German achievements in Exloo. "That was a very good team achievement today with a well earned gold medal for Jil which we didn't expect at her first Under 25 Championship," said Heinze. "Also the other three German rode beautiful rounds and shouldn't be disappointed. With almost 74% Lisa produced another strong result. It was a test with many highlights, especially with good tempi changes. Daktari is a horse that can get nervous and then it's not easy to ride the piaffe fully. Tomorrow is another day and there are new chances. All results are very closely together so it will be the shape of the day."

The Kur to Music finals take place on Friday 17 August 2018.