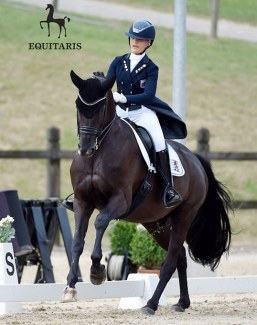 The CDI4* Leudelange at Dressage Grand Ducal in Luxembourgh started on Tuesday 3 JUly 2018 and the first day of competition was marked by young talent. Day one featured the team championship test for pony, junior and young riders as well as the Intermediaire II for Under 25 Grand Prix riders.

It was a perfect preparation for her fourth European Championship: homeside hero Emma-Lou Becca and her Komet won the Junior Team Test presented by Centre Equestre um Boeschelchen on her home grounds in Leudelange. They scored a winning 71,26%.

“Komet had a break for two months and is now really motivated. I like him a lot especially because he is a little crazy," said the 15 year-old, who is trained by the Danish Fie Skarsoe.

Places two and three went to riders from Russia and the Netherlands: Elizaveta Lyban with Solid Gold (69,79%) and Amber de Groot with Homemade (68,93%).

In the Young Riders team championship test, which was presented by FOP Cogest, it was a victory for German Felicitas Hendricks. The high school graduate has her sight set on her gold riding badge: “This was victory number seven.”

After her performance with Faible AS, which was rated with 71,78%, you could see the joy in her face: “Today everything was just right.” Her trainer and uncle  Christoph Koschel was full of pride: “She has a fantastic seat and fast reaction and as a result present this highly sensitive horse perfectly.”

Second place went to the British Jade Ellery with the Hanoverian bred Eloy (68,97%) and third place to Charlotte Remy/LUX with Hofgraf (68,52%).

British Victory in the U25

Dutch based British professional Charlotte Fry, who has already competed in five European Youth Riders Championships, secured the victory at the CDI4* Leudelange in the Inter II for Under 25 Grand Prix riders. The class was presented by Electro Folschette.

With her trainer Anne van Olst's KWPN gelding Dark Legend she was placed on first place by all five judges.

Second place went to the the French Cedric Gallinard on the 16-year old Belgian SBS bred Scherzo ZC (by Ferro x Romadour II) with 69.029%, ahead of Dutch Carlijn Huberts with Watoeshi (67,61%).