No 2018 CDIO Rotterdam for Dujardin and Hester 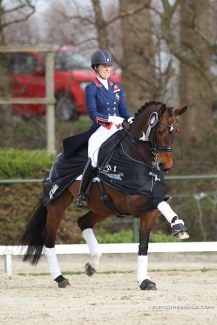 Charlotte Dujardin and Carl Hester are not mentioned on the definite entry list for the 2018 CDIO Rotterdam (21 - 25 June 2018) despite earlier claims that especially Dujardin would be competing in the Nations Cup in The Netherlands.

In previous interviews with Horse & Hound and other publications, Charlotte Dujardin stated that she would be competing at the 2018 CDIO Rotterdam as her second and final appearance on the European continent before British team selection for the 2018 World Equestrian Games.

Charlotte rode her new number one Grand Prix horse, Emma Blundell's Mount St. John Freestyle (by Fidermark) at the 2018 CDI Nieuwe en St. Joosland the first weekend of April. She won both the Grand Prix and Kur to Music. It was their only continental appearance so far. Since then the pair has won the CDI Windsor and now they are scheduled to compete at the 2018 CDI Bolesworth in the U.K. this weekend.

"We are here doing Bolesworth," coach Carl Hester told Eurodressage. "We nominate all shows that we may do, but we picked here. She is riding here. It's too much Rotterdam next week."

Carl Hester has been aiming for a British WEG team spot on Hawtin's Delicato. He has not shown his number one horse, Jane de la Mare's Nip Tuck, since the 2017 European Championships in Gothenburg.