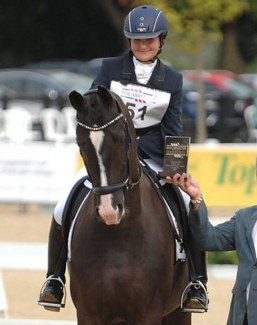 Caroline rose to fame in British dressage circles in 2016, when she won the British Young Horse Championship with her 6-year old San Marco.

Caroline bought “Marco” from Isobel Wessels in March 2016 and was so happy and grateful to have him to focus her attentions on throughout her illness. He brought great joy to her life every day, and the excitement in having him to ride motivated her and kept her going. She treasured the joyous memory of her big win at the National Championships and was looking forward to achieving many more feats with Marco.

Caroline had the most amazing determination and willpower, and would always look for the positive angle to any challenge she was faced with. With her infectious drive and enthusiasm, she simply refused to allow the illness to take over her life. She was never resentful and always just “got on with it”. She was adamant about not letting people know that she was unwell.

It was Caroline’s wish that San Marco is not sold, but stays in the ownership of her son Will and her twin sister Sarah.

Caroline also had a very successful career as an illustrator of children’s books. These have been translated into numerous languages and have sold in over 10.5 million copies worldwide.

Friends and family met in Caroline’s new studio near Whitchurch in Hampshire on Saturday 12th May, to celebrate her life and to remember her as the talented, generous and fun-loving lady that she was.