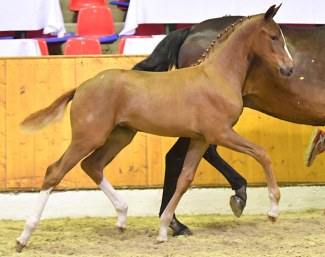 The filly foal Fantasy became the price highlight of the 2018 Summer Mixed Sales held in Vechta, Germany, on Saturday 2 June 2018. The foals took the spotlight in the collection which consisted of a group of talented young sport horses as well as elite foals.

Fantasy (by Foundation x Romanov x Sandro Hit) shone  as the highest priced seller in the elite foal collection at the Oldenburg Horse Center Vechta. This beauty queen, bred by Lilian Sanktjohanser from Löningen, Germany, sold to a stud with Olympic traditions in Lower Saxony for 107,000 euro.

The colt VIP (by Vitalis x Desperados x Rubinstein I), bred by Gerold Karlovatz in Austria, will move to Sweden for 53,000 euro. The jumper foal Conan (by Cornet Obolensky - Kannan - Cassini I) sold for 25,000 euro. He is bred by Ferdi Hinners-Krogmann from Lohne, Germany.

The second most expensive horse was a show jumper: Calimero (by Contefino - Loredo - Grannus), bred by Nadja Steininger from Gardelgen and presented by Lieneke Brouwer from the Netherlands. He was knocked down for 70,000 euro to customers from Switzerland.