#DressageProMovement: What Every Dressage Rider Needs to Know 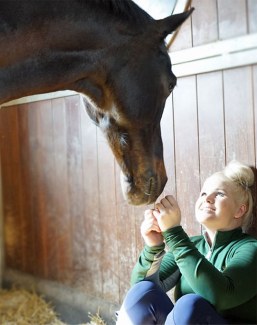 According to Conny they are themes that we think we do right, but in reality, most of the times that’s not the case. That realization struck her when she saw a video of herself riding at a clinic a few years ago.

Conny explains: “This clinic was before I had met Rien van der Schaft and started working with him. To be honest, I was a bit startled of what I saw on the video. I was riding my horse pretty round and deep and basically from the front to the back instead of the other way around.”

“However, if you had told me at that moment a horse should be ridden from back to front, I’m sure I would have totally agreed with you. But at the same time, I wasn’t riding my horse in that way. And I wasn’t even aware of it! I’ve got the feeling this is a big problem. We all say we do a lot of things, but do we really do them?”

It was the starting point of the project #DressageProMovement. Conny already offers online training programs with Dutch team coach Rien van der Schaft, veterinary Morgan Lashley and the Australian horsemanship trainer Tristan Tucker to share the best knowledge and create awareness, but she figured she had to do more.

“I thought to myself ‘what do I really want to accomplish?’ Well, it’s basically that every dressage rider knows about certain principles. And not only ‘know’ about it, but also ride according to those principles. Because you see, I believe you only know something when you’re able to do it. There’s a difference between just knowing and actually doing.”

Conny thought of eight themes with Rien van der Schaft and Tristan Tucker and put it in a free online training so that every rider can join the training.

“I really hope that every dressage rider will take a look at it. This project doesn’t have a commercial motive behind it even though I notice that riders who started following the free training also sign up for a paid training. But that’s not why we do it. We do it because we really want to make an impact and bring more awareness. I believe change is needed in dressage. I feel that has already started, but with this project I want to contribute to that change and improve dressage, both for the riders as for our horses.”