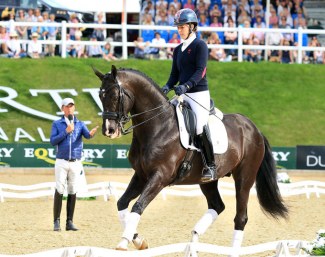 Major British and continental dressage stars are heading to this year’s Equerry Bolesworth International Horse Show. The show is set to host a number of prestigious Dressage Viewing Trials for the World Equestrian Games, Young Dressage Horse World Championships and the European Pony Championships as well as the prestigious CDI3* Grand Prix and Freestyle.

Big names to look out for on the dressage front are of course Carl Hester and Britain’s golden girl, Charlotte Dujardin who so enjoyed last year’s show. Carl and Charlotte will be riding their current stars and potential World Equestrian Games rides, Hawtins Delicato and Mount St John Freestyle.

It was on her heroic partner, Valegro that Charlotte gained team and individual gold medals at the 2012 London Olympics before heading to Rio in 2016 to take another individual gold and team silver medals.

So much has been written about their amazing relationship ever since but now retired, Charlotte’s attention has turned to the equally talented Mount St John Freestyle, a horse that shows all the capability and talent to be heading to the World Equestrian Games in Tryon, North Carolina later this year.

A multi-garlanded gold medallist across so many championships teams, Carl is of course also held in high regard for training a plethora of leading dressage riders in the modern day sport.

Carl’s latest star is Hawtin’s Delicato, a recent newcomer to Grand Prix but also showing the talent required for a place on this year’s World Equestrian Games team.

They will be joined by Michael Eilberg a former winner at the Bolesworth Estate on Woodlander Farouche. Among his many top accolades, Michael was part of the silver medal winning team at the World Equestrian Games on Half Moon Delphi in 2014 and the combination were also part of the 2013 bronze medal winning European team.

Danish rider Anne Van Olst and stable jockey, young British rider Lottie Fry also head to Cheshire. Anne was part of the bronze medal winning team at the Olympic Games in Beijing in 2008 and rode Clearwater at the 2012 Olympics in London. On home turf Lottie was hugely successful with both Z Flemmenco and Remming before moving to Denmark to train with the Van Olsts.

The will also be joined by Her Royal Highness Princess Sirivannavari “Siri” Nariratana Vajiralongkorn from Thailand who is set to compete in the Small Tour classes alongside a number of major dressage stars including London 2012 Olympians Richard Davison and Laura Tomlinson. On form Gareth Hughes, third in the Grand Prix Freestyle at Royal Windsor, also joins 2017 National Championship Grand Prix winner, Lara Butler, who will compete alongside Becky Moody and Charlie Hutton, to name just a few.

As well as top class competition, well known breeders and producers, Anne and Gertjan Van Olst whose legendary stallion Negro was the sire of Valegro will be bringing and showcasing some of their top stallions for a Masterclass with Carl Hester on the Thursday afternoon of the show, June 14. The stallions they will be bringing will represent some of the most exciting talent in the sport of dressage today.

Fans can enjoy watching top horses and riders with a Small Tour Prix St George getting the competition action underway on the Tuesday evening – June 12. Spectators can access the showground free of charge to enjoy this class.

Dressage-goers can then watch top horses and riders over the first two official days of the show with the competition focus getting underway on Wednesday, June 13 with the CDI*** Grand Prix, the Small Tour Inter 1 Freestyle Dressage to Music as well as the Viewing Trials for the Young Dressage Horse World Championships at five, six and seven-year-old stages.

Don’t forget party nights in Club Boles with Friday, June 15 hosting an Ibiza Classic evening full of iconic Ibiza anthems. While Saturday evening, June 16 will see Rick Parfitt Jnr and the RPJ Band set to entertain with a live line-up of rock tunes throughout the evening.

The five day event takes place from June 12 to 17 in the glorious grounds of Bolesworth Castle near Tattenhall, Chester and is set to provide a feast of sport and entertainment with some fantastic dressage stars heading to the stunning venue. VIP Hospitality experiences are available for all sessions throughout the show, and include access to our luxury ringside marquee, with high end dining included from renowned London caterers Absolute Taste. For more information and to book Hospitality packages, contact melanie@bolesworth.com

General admission tickets with 25% off gate prices can be bought online at www.bolesworthinternational.com