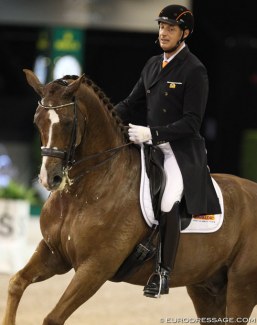 The entry field for the 2018 World Cup Finals continues to change last minute. Yesterday evening, Swiss Marcela Krinke-Susmelj declined an entry as first reserve after Emile Faurie dropped out. This morning Patrick van der Meer confirmed that he will substitute for her at this final hour.

Krinke-Susmelj was on the reserve list with her 17-year old Danish warmblood gelding Atterupgaards Molberg (by Michellino) for the Finals in Paris as she finished 12th with 42 points on the Western European League World Cup ranking. She was also ranked 46th on the World Riders Ranking in February.

However, on Monday evening 9 April Krinke declined a berth in Paris as she has realized competing Molberg in Paris might be overasking him at his age.

"I was very happy to have qualified for the World Cup Finals, yet I have decided not to start Molberg in Paris," Marcela stated. "To cast down any worry I say this straight away: we are very fortunate that our 17-year old Olympic mount is in best health and top fit. Still at no point in time I want to have the feeling to overask him through sportive ambition. The welfare of my horse is most important, because without it there are no competitive goals."

Krinke-Susmelj added that she'll be enjoying Paris by watching it online instead.

Dutch Patrick van der Meer and his team horse, 14-year old Dutch warmblood gelding Zippo (by Rousseau x Haarlem), have confirmed that they will be replacing Marcela in Paris.

Van der Meer was ranked 17th with 29 points on the WEL World cup ranking. In February he was standing 43rd on the FEI World Riders Ranking and in March he moved to the 38th spot.

"Zippo got a little holiday after 's Hertogenbosch, but fortunately I had already picked up basic training with him," Van der Meer told Eurodressage about his preparation state for Paris.