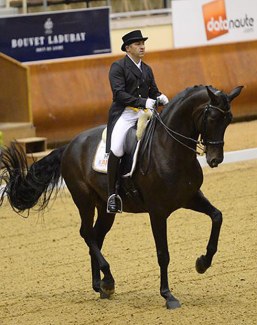 Swedish Under 25 Grand Prix rider Isabella Tovek has acquired the 11-year old Oldenburg gelding Sam Donnerhall to replace her top horse Weltliebe, who was put down after a freak accident in the field at the beginning of January.

Tovek was the 2016 Swedish Young Rider Champion and in 2017 she finished sixth on Weltliebe in the Swedish Under 25 Championships. In March 2017 Tovek acquired the confirmed international Grand Prix horse Happiness from her now coach Michelle Hagman, but Weltliebe was the mount that produced the most consistent results for her.

With the sad passing of Weltliebe, the Tovek family decided to get a second iron the fire and they found Sam Donnerhall in Isabell Werth's barn.

Tovek is stoked with her new ride. "We bought him from Isabell Werth. I'm going to ride U25 classes first, then Grand Prix," Tovek told Eurodressage about her future plans on Sam Donnerhall, adding, "but first I want to know him before I start thinking of what classes I should ride."

Sam Donnerhall is by Samarant out of Dolce-Vita (by Donnerhall x Pib Bube II), bred by Christoph Boulanger.   He was discovered as a 5-year old by French rider Anthony Astier, who trained the horse up to Grand Prix level with the help of Helen Langehanenberg for the past four years.

Astier and the dark bay gelding began competing in France in 2012. In 2013 the horse stayed home but returned to the show ring in June 2014 with starts at four national shows. In 2015 the horse moved to national Grand Prix level. They skipped 2016 and returned in 2017 with national starts in Le Mans, Haras Le Pin, Rosieres, Vierzon, Deauville, Compiegne, and then their first CDI, the 2017 CDI Saumur in September, where they finished 18th in the Grand Prix with 65.800 and 14th in the Special with 65.627%.

A former groom for Isabell Werth in 1997 during her time at Dr. Uwe Schulten-Baumer, Anthony took Sam Donnerhall to Werth in November 2017 for her to assess the horse. She agreed to take it into training and test what is in the tank, after which the pair decided to sell the horse.

Astier is thrilled with the sale of his horse: "Now (with) the sale of my horse I can afford to built my own place and I decided to move to Normandy," he told Eurodressage.