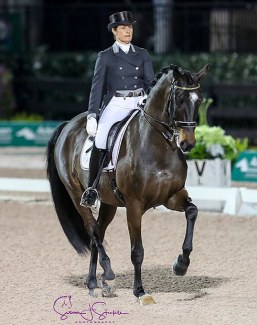 Swedish Tinne Vilhelmson Silfvén and Lövsta Stuteri’s Paridon Magi scored their first world cup points of the 2018 show season by winning the Grand Prix kur to music at the 2018 CDI-W Wellington on Friday night 12 January 2018. Vilhelmson and Paridon Magi post a new best of 81.15% to win the freestyle.

The Swedish warmblood Paridon Magi had never scored over 79% before, so his winning 81.15% represented a huge new record for the 15-year-old gelding by Don Primero. Tinne rode to a Queen medley by Cees Slings

“It’s really nice to be back here again,” said the seven-time Olympian, who is enjoying her eighth consecutive winter season in Wellington. “I like to start the season like this — and then keep going like this; that would be nice. I’m extremely happy. This is the perfect place to compete, with all the different details for the horses worked out.”

Shelly Francis (USA) filled the runner-up spot on Patricia Stempel’s 14-yo Hanoverian gelding Danilo, posting 77.725%. It was the first time the pair had performed under lights.

"He was a bit edgy as it was at night and he got hot, so there were little mistakes, but it was really fun and I could actually smile while riding. He keeps getting better; he’s nice and fit; a little more tuned up,” added Francis, who rode to a compilation of music put together by Marlene Whitaker.

The 20-year-old Spaniard Juan Matute Guimon filled third after a rousing performance on his father’s 12-year-old Quantico, whom he has been riding since the horse was seven. His expressive test included one-handed pirouettes that earned whistles from the appreciative crowd, and 75.275% from the judges. ﻿

“I felt like a gladiator out there! It was a challenging ride, but I earned all my points,” said Matute, who rode to music made by his mother and a floorpan designed by his father.

Earlier in the day Matute bolstered his prize-money further, topping both the the Under-25 Short Grand Prix, as well as the Young Rider Team test. His smooth 71.643% U25 grand prix win came aboard the 15-year-old Hanoverian gelding Don Diego, taking the horse’s tally to two wins in two days. His young rider horse Copernico — an eight-year-old Oldenburg gelding by San Amour x Don Gregory — scored 71.235% to win the small class convincingly.

Another rider recording back-to-back victories was America’s Jennifer Baumert. She topped the Intermediate I CDI1* with 71.471% — improving on her winning prix st. georges score — with Elizabeth Juliano’s Handsome, a 13-year-old Hochadel x Weltmeyer Hanoverian gelding. Canadian rider Diane Creech steered her own and Louise Leatherdale’s Robbie W to Intermediate I CDI3* honors. The 15-year-old Oldenburg gelding by Rubin Royal x Inschallah posted 69.706%. The class was a nail-biter, with Creech finishing just 0.03% ahead of second-placed Melissa Taylor (USA) and Ansgar. Canada's Diane Creech and Robbie W clinch the FEI Intermediate I CDI3* by just 0.03%

Four riders contested the Amateur Prix St. Georges class. It was topped by Janne Rumbough on Armas Zumbel, a Spanish-bred PRE by Escarzo x Relampago II. The 15-year-old grey gelding scored 68.441% for the win. Rumbough will celebrate her 74th birthday next month.