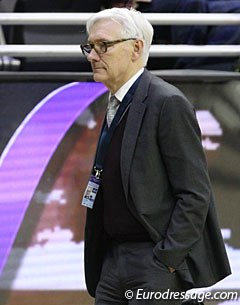 The FEI's 54-day suspension of Danish 5* judge Leif Tornblad for breaching the judges' code of conduct when he spoke out about the Dutch training system in Horse Magazine in September has led to major discussion on social media.

On 28 September 2017 Maarten van der Heijden, technical sport director of the Dutch Equestrian Federation (KNHS), confirmed that the KNHS officially filed a complaint with the FEI against Tornblad's statements as according to them they attacked the Dutch training system and several of its key riders.

The FEI investigated the matter and announced Tornblad's suspension which runs from 8 November until 31 December 2017.

On 9 November Dutch lawyer Luc Schelstraete issued a press release in which he marked his client Sjef Janssen's successful issuing of a complaint with the FEI against Tornblad. However, in an interview with Horses.nl, Schelstaete added that they considered the suspension too minor and they request the FEI Ethical Committee to handle the matter. If not, they will go to CAS

Tornblad was not going to officiate at any CDI's in his suspension period. "Mr Tornblad was not scheduled to judge at any FEI events in November and December," an FEI spokesperson told Eurodressage.

The Danish judge told Eurodressage that there will be "no appeal unless something more occurs."

The Horse Magazine reacted the the suspension as following: "Seems it doesn’t pay to speak your mind if you are an FEI judge. Leif Tørnblad opened up with his views on the direction of dressage in an interview with Christopher Hector – for his pains he has been abused by the Dutch press, and now suspended by the FEI. What hasn’t happened is that anyone thinks and responds in an intelligent way to the serious issues the Danish Five-Star judge has raised."

Tornblad spoke with Danish magazine Ridehesten about his suspension and stated that "I have noted and accepted the FEI's suspension (...-. Dressage judges and other 'stakeholders' have no voice. I believe this does not affect me as a judge. The FEI has factually stated that they no have any criticism on my judging. I already have agreements to judge in Denmark and Sweden for the remained of 2017, which are not affected by the FEI decision. In the coming year I already have many invitations (to judge) which I look forward to."

On social media the outpour in defense of Tornblad's position is massive. Many share the belief that the FEI is muzzling its judges and condoning poorly trained horses, while a minority speaks out in agreement with the FEI's suspension.

Favourable statements about the actual interview with Tornblad gave include: "Good luck getting any judge to do an interview about the sport now. I read that article, I thought he was extremely tactful with quite leading questions." .... "The answers were balanced and clear and directed at dressage - the discipline, not a specific rider or horse."... "When I read the original interview I thought he handled the opinionated and heavily loaded questions very well. He tried to give fair and balanced responses to aggressively worded, one sided questions."

Former Danish Grand Prix team rider Lone Jorgensen stated: "It doesn’t matter if he is right or wrong. There’s a FEI rule about that which you as a judge have to respect. If every judge would give interviews about what sort of riding they like or even which riders they prefer then our whole system would brake down.  They can easily express their opinion in the marks they give ." Others also rung in with the same opinion. One reaction was: "It was outside the rules and judges have one place to give their opinion about horses and riders and that’s in the arena via their marks. In his defence, he was led astray by a zealous journalist"