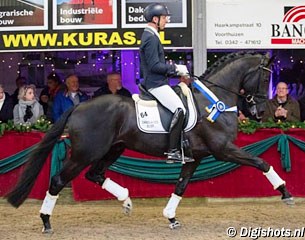 The 4-year old Dutch warmblood Imposant W has been approved for KWPN breeding after passing the shortened 21-day autumn stallion performance test in Ermelo, The Netherlands, on 8 November 2017.

The stallion passed the testing with a whopping 89 points. He was accepted for the Stallion Performance Testing through his performance at the 2017 Pavo Cup Finals, in which he finished third. For his 21-day testing he scored 9 for walk and trot, 8.5 for canter, 9 for suppleness, rideability and potential.

The black is by Wynton out of elite mare Zarina (by Krack C). He is bred by W. Wijnen and owned by Theo Driessen, who bought him at the 2013 Borculo Foal Auction

"Imposantos lived up to his pedigree in the Pavo Cup last summer and also during the testing he left a very good impression. He's a stallion with a very good dressage conformation. He moves with expression, suspension and leg technique."