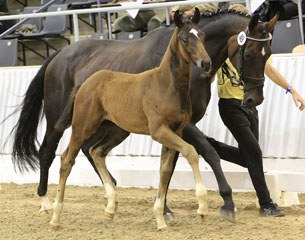 With a big collection of over a 100 foals, the 2017 Hanoverian Elite Foal Auction in Verden has been split up over two days. Frederick G became the best selling foal on the first day, Friday 4 August 2017.

The bay colt Frederick G (by For Romance II x Davignon) is bred  by Wilfried Grabow and sold for 52,000 euro. A renowned horse owner from Bavaria bought the colt.

The colt Fitzgerald (by Franklin x Hotline) sold for a whopping 47,000 euro, while colt Der Hit (by De Niro x Sandro Hit) fetched a price of 25,500 euro. Filly Revette (by Radisson x Stalypso) sold as a dressage foal for 20,000 euro.

Fifty-one foals were part of the first group being auctioned on Friday. They achieved an average price of 10,431 euro.