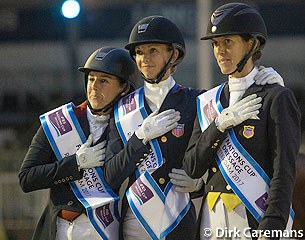 Returning to FEI Nations Cup CDIO5* Rotterdam, the U.S. Dressage Team clinched a gold medal victory over seven countries in the fourth Nations Cup in the 2017 series. Comprised of Laura Graves, Olivia LaGoy-Weltz, Kasey Perry-Glass, Dawn White-O’Connor, and led by Chef D’Equipe, Robert Dover, the team displayed their ability to persevere, while continuing to grow in their performance.

Seven countries were initially entered with full teams for the Rotterdam Nations' Cup but only four made it to the finish line. The U.S. Team was challenged by the home favourites, the Dutch, who sat on America's heels until the final competition day. However, as Madeleine Witte-Vrees' Cennin pulled a shoe in the warm up for the Grand Prix Special and had to withdraw, Team Holland could no longer deliver a second mandatory GP Special score for the final standing and their team was eliminated from the Nations Cup.

This freed the way for U.S.A. to grab the winner's sash after the Grand Prix Freestyle on Saturday night 24 June 2017. The U.S. team already sat in first place, ahead of the Dutch team, after the Grand Prix on Thursday, overcoming the elimination of White-O’Connor (Cardiff, Calif.) and Four Winds Farm’s 2002 Westphalian gelding, Legolas. The horse was rung out from the Grand Prix as he appeared unlevel.

Graves (Geneva, Fla.) and Verdades, her own and Curt Maes’ 2002 Dutch Warmblood gelding, anchored the team, winning both the Grand Prix and the Grand Prix Freestyle. In the Kur to Music Graves topped the board with 80.980% despite a few mistakes and some spookiness in their freestyle ride. The sensitive bay had a hiccup in the tempi changes and lost the rhythm in the trot extension. Graves, however, was a league of her own in Rotterdam with presenting her horse with the greatest of lightness. 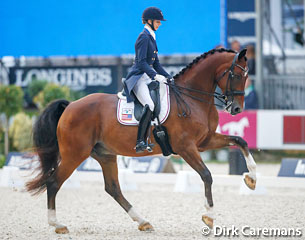 “I am once again so proud of our team for winning a major Nations Cup here in Rotterdam, “ said Dover. “This is a year of building depth in our team by introducing many fresh, new combinations, mixed with our fantastic veterans. I am looking forward to the rest of the season and applaud all of our athletes showing in Europe.”

Eurodressage's Astrid Appels was on the scene taking photos of all dressage riders. If you are interested in digital files or prints for personal use, social media, etc. contact us.