German Federation Reminds Members Not to Trim Whiskers and Ears 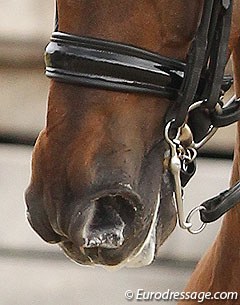 Imke Lubeseder, secretary to Sönke Lauterbach, the actual secretary-general of the German Equestrian Federation (FN), has sent a reminder to the members of the FN that trimming whiskers and ears is against animal welfare and forbidden in Germany.

The reminder stated the following:

"We would like to draw your attention to the fact that according to paragraph 6 of the German Animal Welfare Law, trimming the vibrissae around eyes and muzzle as well as clipping or cutting the hairs inside the ears of horses are prohibited.

Adherence to this rule at horse shows in Germany is being supervised by German authorities. Competitors can be fined if their horses are found unlawfully trimmed or clipped."

Trimming the vibrissae has been made illegal in Germany in 1998 for welfare reasons,  but is permitted in the majority of countries.

Whiskers and ear hair might look untidy and spoil the immaculate turn-out of competition horses, but even though they look superficial and nonessential, they are critical to a horse's spatial awareness. They alert the horse for objects immediately in front of its eyes of or below its nose. Grazing horses rely on their whiskers to guide their muzzles toward edible food and away from other objects. The whiskers near their eyes warn them from bumping into obstacles.

Renowned Dutch veterinarian Machteld van Dierendonck conducted a pilot study on how to assess the effect of manipulation of the vibrissae. 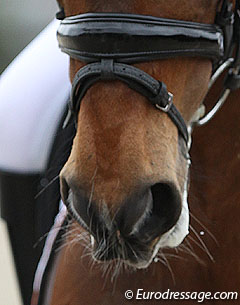 "The horse’s vibrissae are often trimmed for cosmetic purposes in the Netherlands," said van Dierendonck. "The function of vibrissae has been studied in certain rodents and sea mammals, but not in horses. To assess the effect of trimming vibrissae on the welfare of horses, the vibrissae’s function in the horse must first be studied. However, no standardized test is available. " Her pilot study, however, resulted in the fact that "no definite conclusions on the effect of trimming of any horse's vibrissae can be drawn from our data."

L. Emerson, K. Griffin and A. Stevenson of Notthingham Trent University conducted a study in the practice and attitudes regarding trimming of equine vibrissae and concluded that "the most common reason given for trimming was 'it looks tidy'. Efforts should be made to educate horse-keepers about the importance of vibrissae in equine welfare, and to ensure that trimming is not required, rewarded or encourages within competition."