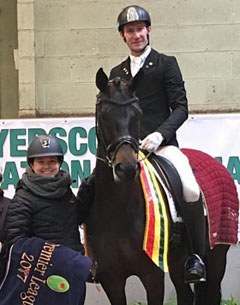 Brown made his British competition debut starting with Mount St. John's 6-year old Oldenburg mare Top Secret (by Totilas x Dacaprio). He scored a winning 8.66 points in the 6-year old young horse class in a field of 10 combinations. The pair also placed fourth in the Medium test with 68.24%.

"Jayden arrived in the U.K. at the end of last week and came with us to help at Myerscough for the first premiere league of the year," said MSJ's owner Emma Jane Blundell, who met Jayden for the first time at Equitana Australia a few years ago.

When asked if Brown has been hired as MSJ's new assistant trainer, the Australian replied, "I haven't relocated just yet. Home to Brisbane next week but it's something I'm looking at in the future." Blundell rung in and added, " it's a one off for now but we hope it's the start of more to come in the future."