Quadroneur Sold to Bulgaria as Ride for Russian Irina Zakhrabekova 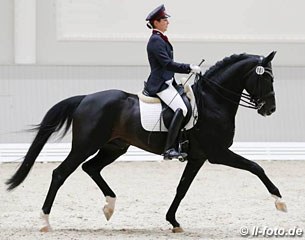 A Bulgarian sponsor of Russian FEI rider Irina Zakhrabekova has aqcuired the 9-year old licensed German Sport Horse stallion Quadroneur for Irina to ride. The stallion has been in training with Isabell Werth in preparation of a transition to his new rider.

Bred and previously owned by the Brandenburg state stud in Neustadt/Dosse, Quadroneur is by Quaterback out of Pirouette (by Sandro Hit x Fruhlingsbote x Adept).  He was licensed for breeding in Radegast in February 2010 and did his 30-day stallion performance test in Neustadt Dosse in the autumn of 2010, scoring 8.34 for dressage and 7.80 for show jumping, finishing on an overall of 8.24 points.  Quadroneur currently has 30 offspring registered for sport with the German Equestrian Federation and he has sired one approved son so far, the 4-year old German Riding Pony (!) Quadroneur's Junior.

Quadroneur began his competition career as a 3-year old under Christian Flamm. In 2012 Susann Göbel took over the ride and in 2014 Stephanie Fiedler started showing the dark bay stallion at M-level. The pair made its S-level debut last year and qualified for the Nurnberger Burgpokal Finals in 2015 but did not compete there.

Quadroneur was acquired by a syndicate for Zakhrabekova, who will begin competing the stallion next year. Werth has been training the horse to smoothen the transition for the new rider. 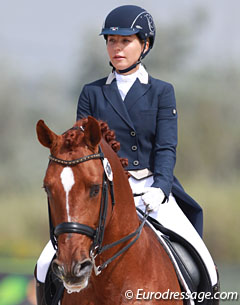 "Quadroneur was in my stable for a few months," Isabell Werth told Eurodressage. "In the future the pair will be trained by Jose Garcia Mena and me. The future plan is to establish both, Irina and Quadroneur, in the Grand Prix sport."

Zakhrabekova, who commutes between Spain and her yard in Krefeld, Germany, is ecstatic about her future with the stallion. She is trained by Jose Antonio Garcia Mena and has been sponsoring the Spanish rider through her company Zetta Sport.

"I am so happy. He was bought for me by one sponsor - they don't want to be named at the moment - and next year I will be trained by Isabell and Jose," Irina told Eurodressage.