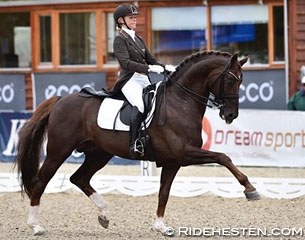 The 12-year old elite Danish warmblood licensed stallion Skovens Rafael (by Romanov x Don Schufro) is moving to Jan Brink's Tullstorp stables, where he will stand up for stud for the 2016 breeding season.

Skovens Rafael is bred by Jens Lund Pedersen and Kirsten B. Hansen and owned by Lotte Lindgreen in partnership with Stuteri Priess in Denmark.

"We are very excited to be able to offer this fine stallion to Swedish mare owners," said Jan Brink. "He will really suit many Swedish mares."

Under Lotte Skjaerbaek the liver chestnut Skovens Rafael competed at the 2009 and 2010 World Young Horse Championships, where he finished 7th and 8th in the Finals. At the 2012 CDI-W Odense in October theymade their international debut in the small tour. In 2015 they did only one international show, the CDI Odense in May 2015 where he scored 67% twice still at small tour level.