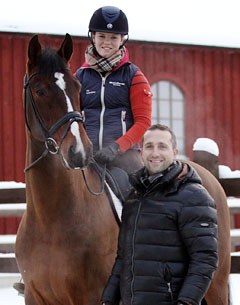 The now 18-year old Biggles (by Briar x Krevad x Falstaff) was trained to Grand Prix level by Jan Brink and bred and owned by the Lundberg-Persson family.

In 2010 Kristian von Krusenstierna took over the ride from Brink and competed the bay stallion at numerous interntional competitions between 2010 and 2015. A second place in the Grand Prix Special at the 2012 CDI Radzionkow and 2014 CDI Wiesbaden were their career highlights. Kristian last showed Biggles at the 2015 World Cup qualifier in Stockholm in November.

The stallion has now moved on to Lina Dolk as a schoolmaster. The young rider has tried out the horse for several days at Von Krusenstierna's yard Agesta before moving to Broloten, where Lina trains with Emelie Brolin.

"I took the decision in the autumn that 2015 would be my last season with Biggles," said Von Krusenstierna. "Biggles is still in good shape and condition  and we are delighted that he'll continue competing, which he loves. I'm also happy that a young rider now gets the changes to develop together with an established Grand Prix horse. Lina rides him really well and I'm really looking forward to their future."

Lina Dolk is an 18-year old young rider who has been campaigning Jouleen af Hogberget at junior level since 2014. She won the Junior Kur to Music finals at the 2015 Nordic Baltic Championships in Aalborg, Denmark.