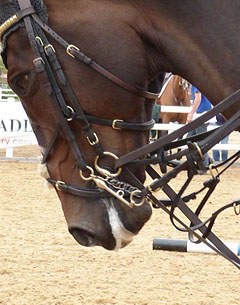 Reins are universally accepted as a means to communicate with the horse. Pressure and release of the reins is essential in the learning process for the horse and consistent and stable rein tension is fundamental to underpinning effective training.

Additional equipment (e.g. martingales and draw reins) are often used to influence the behaviour exhibited by horses with the intent of gaining more control over a horse’s head position and/or to enhance the safety of the rider. The use of such equipment is potentially aversive to the horse and may cause concern if used or adjusted inappropriately thus compromising horse welfare.

In relation to novice riders Randle stated that “novice riders may find it difficult to match the horse’s movement and they may rely upon the reins for stability resulting in not only large rein tensions being applied but also inconsistent rein tensions which can lead to confusion for the horse, and the occurrence of conflict related behaviours by the horse. This is potentially worrying because it may result in habituation and eventually the development of Learned Helplessness”.

The objective of the Duchy College study was to investigate the effect of the use of martingale attachments on rein tension in the horse when ridden by novices. Six novice riders rode six horses through three replicates of a predetermined route based on a 20m circle incorporating walk, trot and halt in both directions. During the three phases of testing each horse-rider combination rode without martingales, with a running martingale and with an Irish martingale. The researchers used rein tension gauges to objectively measure and assess the rein tensions with and without the use of the two different martingale attachments on the horses when ridden by novice riders.

The running martingales used were of standard design and were correctly adjusted according to established British Horse Society guidelines to prevent them from influencing the horse’s head and neck posture and to avoid them having any form of ‘tie down’ effect.
The standard running martingale design consists of a strap that attaches to the girth and passes between the horses forelegs. The strap is supported by a neck ring. The strap then divides in two; each of the two ends is fitted with a small ring. The left snaffle rein is passed through the left ring and the right snaffle rein is passed through the right ring. When the left and right rings are each taken to the respective sides of the horses neck, the martingale is long enough to reach the horses wither.

The Irish martingales used were also correctly adjusted according to established British Horse Society and were of standard design: two rings connected by a strap approximately 10 cm long. The snaffle reins pass through the rings underneath the horse’s head. Although traditionally
known as a martingale, the Irish martingale is not connected to the saddle or girth and has no ‘tie down’ effect - it cannot influence the horse’s head and neck posture.

The results showed that martingale use significantly reduced the rein tension and resulted in more consistent rein tensions applied by novice riders. The results suggest that martingale use by novice riders has the potential to decrease the likelihood of unsuccessful training outcomes such as confusion, behaviour indicative of conflict and ultimately the development of Learned Helplessness by dampening the effect of excess or unintended tension; therefore improving the welfare of the ridden horse. Researchers concluded that on the basis of helping to achieve more consistent use of the reins “correctly fitted running martingales and Irish martingales may have a place in the educational learning environment to improve the welfare of the horse”.