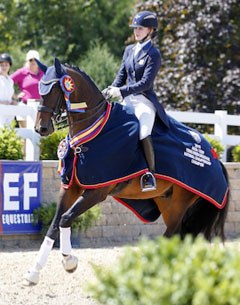 On a beautiful summer day on 22 August 2015, America's top youth dressage athletes went to task in the 2015 U.S. Dressage Championships. Coming away with top honors in the Young Rider Championship was Catherine Chamberlain and Avesto Van Weltevreden. In the Junior Championship Mickayla Frederick maintained her lead to be named National Champion. After day one of the Pony Rider Championship, Allison Nemeth and Pablo S lead the division.

Following day one's Young Rider Team Test, Kerrigan Gluch (Wellington, Fla.) led by the slimmest of margins over Chamberlain (Murrieta, Calif.) after scoring just four-thousandth of a point higher. Both athletes entered the arena with determination this morning, but it was Chamberlain and Kimberly Pribble's KWPN, Avesto Van Weltervreden, who took the ultimate win in the class and were named National Champions. The pair scored 69.605% in the Young Rider Individual Test for a final overall score of 69.430%.

This marked the first National Championship title for Chamberlain, who is a four-time Gold medalist at the North American Junior and Young Rider Championships.

"I was very happy with my ride today, it was really smooth and I liked the power we had in the medium trot and overall self-carriage and impulsion in the trot. His tempi-changes were also a highlight. He is still a little green at this level as he just started it in February. It has been a project all season getting to the point where we can really nail everything, especially the changes, so I was really happy those were super in this test. It was my last-ever young rider test because I am aging out this year, so I am really thrilled with the result," said Chamberlain.

This year's youth dressage national championships are coinciding with the U.S. Young and Developing Horse Championships; Chamberlain expressed what this first-time pairing meant to her, "Having the other championships alongside has been really inspirational. To see all those top combinations and the quality we have in the United States is really fun."

Gluch and Hampton Green Farm's PRE, Vaquero HGF, put in a valiant performance today, though not as fluid as day one's test, to take Reserve Champion honors with an overall score of 68.794%.

"My canter tour was really energetic, the tempi-changes were really good, and our pirouettes were the best they've ever felt in the ring, so I was really happy. Vaquero HGF really surprised me doing this level this year, I wasn't expecting it, I can't ask for anything more," said Gluch.

After finishing seventh on day one, Hannah Bauer (Purcellville, Va.) and her own KWPN, Trustful, improved dramatically to finish second in today's class and third overall in the championship on a final score of 66.272%.

"I am happy with the overall control I had in my test; it was 10 times better than what I had in my first test. This is my first year at the Festival of Champions and I couldn't have had a better experience," said Bauer. 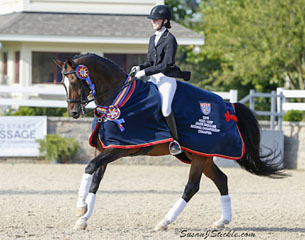 Mickayla Frederick (Johnston, Iowa) and Robert's Susa's Hanoverian, Wrainier Q, finished third in the Junior Individual Test on a score of 68.026%, but were named overall champions on the strength of a brilliant day one performance for an overall score of 69.171%.

"I definitely felt today that I was really riding, and not just along for the ride. It felt like I was able to slow time down and make changes as I went," said an ecstatic Frederick.

Winning the individual test and finishing as the Reserve Champion overall was Kristin Counterman (Ashburn, Va.) and Caroline Stephen's KWPN bred Three Times. The pair impressed with a fluid, powerful test to score a 69.474%, giving them an overall score of 68.408%.

"I was so pleased with my test today. I felt like I was able to ride every step and he was with me every step of the way. Our canter improved even more from our past test, he was expressive, and the trot was forward - everything just went great," said Counterman.

Moving up from fourth-place to finish in third overall was Anna Weniger (Apex, N.C.) and Dawn Weniger's KWPN mare Izeffia on an overall score of 66.664%. 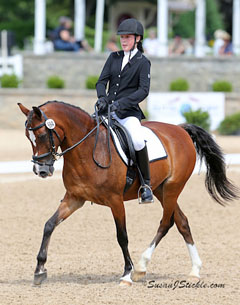 Beginning the quest for a National Championship title, eight pony rider combinations entered the Grand Prix arena today to perform the Pony Rider Team Test. Coming away with a commanding lead in the division was Allison Nemeth (Flemington, N.J.) and her own German Riding Pony, Pablo S, scoring a 70.940%.

"Today my pony was a lot more energetic and collected than he usually is and really listened to me. I am just so glad and thankful to be here," said Nemeth.

McKenzie Milburn (Bothell, Wash.) put in a solid test to score a 66.496%, good for second place, with her own Westphalian, Darius. "The best part of my test was my canter work and half-passes, he worked really well with me today," said Milburn.

Sitting in third is Brynne Varvel (Bloomington, Ind.) and her own homebred and trained Morgan, V Back in Black, scoring a 65.427%.