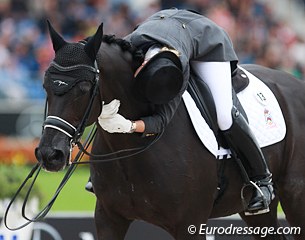 Spanish Olympian Morgan Barbançon Mestre has retired her number one Grand Prix horse Painted Black from an active sport career and competition after her final freestyle ride at the 2015 European Dressage Championships in Aachen, Germany, on Sunday 16 August 2015.

The now 18-year old licensed Dutch warmblood stallion (by Gribaldi x Ferro) will spent his retirement at Morgan's base in Weert, The Netherlands, and will be available again to breeders. Painted Black was proclaimed Keur stallion at the 2015 KWPN Stallion Licensing for the successes his offspring have booked. So far Painted Black has sired three KWPN-approved sons: Bon Bravour, Ebony, and Enzo Ferrari. 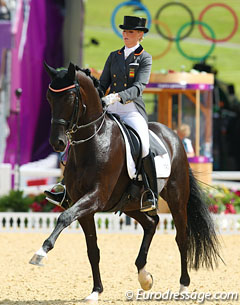 Morgan's parents acquired Painted Black as a seasoned Grand Prix schoolmaster for their then 18-year old daughter in 2010. In 2011 they got their Grand Prix feet wet in the Under 25 division and booked victories in the U25 classes in Broholm, Aachen and Rotterdam.

As of 2012 Morgan and Painted Black were instrumental to Spanish dressage. They represented Spain at the 2012 Olympic Games in London and at the 2014 World Equestrian Games in Caen, France, where they finished 15th in the Kur to Music Finals. They contested the 2015 World Cup Finals in Las Vegas, U.S. and finished 8th in a world class field. They rounded off their highly successful career together by helping secure Spain's ticket to the 2016 Rio Olympic Games at the 2015 European Championships in Aachen last week. They were also 12th in the Kur to Music finals. 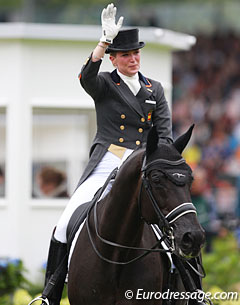 "I owe everything to him," Morgan gushed. "He has made me the rider that I am and has brought me to every big event. I am so grateful to my parents who gave me P.B. as my 18th birthday present. I am also incredibly grateful to my coach Andreas Helgstrand, from whom I have learnt so much. He has truly opened my eyes on various aspects of riding and the development of a dressage horse."

Morgan will now give Painted Black the retirement he deserves: lots of hacking in the woods, cantering on the race track as well as plenty of paddock time. He will also be standing back at stud.