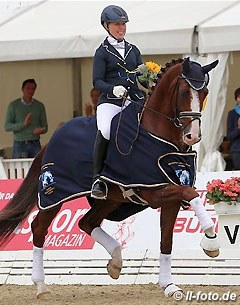 Two Swedish and a Westfalian warmblood qualified for the Final of six-year-old dressage horses  through the consolation finals held on Saturday afternoon 8 August 2015 at the World Young Dressage Horse Championships in Verden, Germany.Quarton, Revolution and Quotenkonig captured a late entry ticket for the finals by finishing in the top three.

Quarton (by Quaterback x Don Schufro), presented by the Swedish rider Yvonne Österholm in Verden, won the Small Final with a final score of 8.46. Second place went to the black-brown gelding Revolution (by Skovens Rafael x Fürst Heinrich), ridden by Swedish Anna Svaneberg. They were awarded a final score of 8.38.

Third new competitor in the Final on Sunday will be the Westfalian stallion Quotenkönig (by Quaterback x Fürst Piccolo) under Lisa Lindner with a final mark of 8.14.

The results will certainly delight the staff at the National State Stud Neustadt-Dosse in Brandenburg a couple of hundred kilometres away as the chestnut stallion Quarterback, sire of Quarton and Quotenkönig, is the frequently used star of the breeders of the Brandenburg stallions.