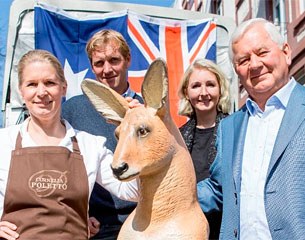 When being asked: „What do you particularly like at Horses & Dreams?“ the 95-year-old Rosemarie Springer from Hamburg simply replies: “Everything – I will even travel to Hagen on all four.” Springer must have been as convincing when she took the then 12-year-old Kristy Oatly to Germany. In approximately 12 days, Kristy Oatley will compete at the 2015 CDI Hagen for her home country Australia with Ronan, her sports partner at the 2014 World Equestrian Games in Caen.

“Blood is thicker than water,” knows the mother of three, and she particularly looks forward to meeting her family from April 22 to 26 at Horses & Dreams meets Australia. Not only backstage, but also in the Almased dressage stadium as she will also compete against her cousin Lyndal Oatley: “We are of course competing against each other, but first of all, we will be happy about the accomplishments of each other, and, of course, we will support each other.”

The multiple Derby-winner André Thieme is looking forward to Hagen with great pleasure. As in recent years, he would directly travel to the Hof Kasselmann for Horses & Dreams after the horse shows in Florida, the championship team rider explains. “I am one of eight jumpers who have the chance to qualify for the European Championships in Germany. There is only little chance, but there is one.” Thieme will start the season in Germany with his top horses Contanga and Conthendrix. The latter was developing into a top horse, Thieme explained. “Conthendrix has that tiny little bit more power and endurance and is scheduled to collect points for the DKB-Riders Tour at Horses & Dreams.”

The Hagen dressage coordinator Dr. Ulf Möller provided the “Australian” cherry on the cake: “We asked ourselves what the audience would expect from Australia, and we agreed that it would be Aboriginis.” With some good wine in far Australia approx. one week ago, Möller finally convinced one generous Australian, and now we can finally state: “The Aussies will come to Hagen at the Teutoburg Forest, even their native inhabitants, the Aboriginis.”

Host Ulli Kasselmann, however, managed that the venue at the Hof Kasselmann will be well-prepared for the next 20 years. “Our show ground has a new outfit – the concept was updated and infrastructure was improved,” the organizer explained. And this will already be effective as of this year as the 2015 tournament schedule does also include the international young rider festival “Future Champions” from June 16 – 21 and the Dressage Nations Cup CDIO from July 8 to 12, two more highlights at the Hof Kasselmann.

Related Link
Eurodressage "On the Scene" at the 2015 CDI Hagen