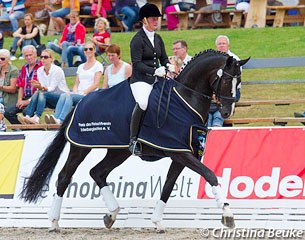 The 4-year old Hanoverian breeding stallion Danciano has been sold by its owners Andreas Helgstrand and Paul Schockemohle to France. The stallion will remain in Germany to stand at Schockemohle's station in Muhlen.

Born in 2010, Danciano is by Dancier out of Rodney's Girl (by Rotspon x Wolkenstein II). He is bred by Jan-Niclaas von Holten.

The black stallion became a premium stallion at the 2012 Hanoverian Stallion Licensing and was the price highlight of the auction, selling for 320,000 euro. Danciano was the winner of the 30-day Stallion Performance Test in Schlieckau in 2013 with a dressage score of 8.91 and an overall score of 8.48. Under Anja Engelbart, Danciano qualified for the 2014 Bundeschampionate in Warendorf but did not compete there.

The new owner is Haras de Malleret, a company to which the names of French nobility are attached, including that of the late Bertrand du Vivier de Fay Solignac and his widow, the marchioness du Vivier. Haras de Malleret, based at a castle with vineyard near Bordeaux, France, has recently developed its brand new equestrian centre on that property.