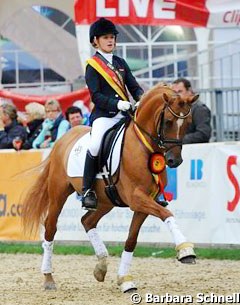 The 6-year old Dressage Pony division is one of the most anticipated pony classes as several of the ponies competing in this category will move on to FEI pony level and international competitions in the near future. The grand 6-year old title went to Vivien Lou Petermeier's chestnut Da Vinci HS (by Double Inn x Gregory). The combination scored 8.5 for trot and canter, 9 for walk, submission and general impression to finish first on an average of 8.80.  Maike Mende and the dark bay Nobel Nagano (by Nagano x Nobel) were the runners-up with 8.30.

The 5-year old division was won by German FEI pony rider Francesca Heil aboard her chestnut rising star Dimension AT (by Donchester x Notre Beau). Ridden to the 4-year old title by Wibke Hartmann-Stommel at last year's Bundeschampionate, Dimension scored 9 for trot, 9.5 for walk, 8.5 for canter, 7.5 for submission and 8.5 for general impression to win the class with an average of 8.6. German Junior rider Anna Lisa Theile became the reserve champion on Gambys Greta (by Don't Worry x Brillant) with 8.4.

Check out a selection of photos from the pony classes at the 2013 Bundeschampionate.