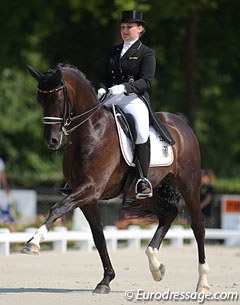 German Juliette Piotrowski took an early lead in the Young Riders Team Championship Test on the first day of competition in Compiegne. The days before the start of the show were already quite exciting for the Dusseldorf based rider, who was almost on the verge of not riding at the competition at all. Her number one horse Flick Flack became injured and due to a surprisingly early "Last Day of Substitution" set by the FEI on 1 July 2013, instead of one hour before the vet check, Piotrowski was initially not allowed to replace Flick Flack with her reserve horse Sir Diamond. After quite a few meetings with the chef d'equipes of the other nations in Compiegne, it was agreed that Piotrowski (as well as potential other reserve riders) could step up to the plate when necessary before the vet inspection.

The 2013 Euros began early Wednesday morning with the first group of Young Riders in the Team test. Juliette Piotrowski and the 8-year old Oldenburg gelding Sir Diamond (by Sandro Hit x De Niro) were put in the lead by the judges with a generous score of 73.079%. Judge Phillips had her at 70.00% whereas judge Myhre deemed the ride worthy a 75.00%. Piotrowski, who is a Bereiter student of Ton de Ridder but trained by her mom Claudia Haller, rode a very energetic, forward test with lots of expression and confidence, but her black gelding had to be continuously spurred forwards. Juliette's ankles were never quiet on the horse and the rider was visibly working hard to ask the required from her horse. The trot work was forward and confident, the extended walk had tons of overtrack, though the rhythm could have been clearer. The walk pirouettes were reasonably well executed but could have shown more impulsion. The canter pirouettes were good, but in the tempi changes the horse was quite crooked in the hindquarters with each change. 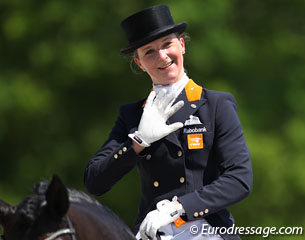 Dutch Debora Pijpers and her experienced 18-year old Dutch warmblood stallion Now I'm Here (by Contango) were quite the opposite of what Piotrowski had shown. The elegant combination were very harmonious with a light and steady contact, and did a super secure execution of all the movements, but throughout the test Pijpers could have had the horse a bit sharper on the aids and asked for more expression in each movement. The tall dark bay stallion showed good self carriage in trot but the extended walk was quite limited. The canter pirouettes were nicely executed as well as the tempi changes, but the whole ride lacked pezzazz.

British Pippa Hutton and her elegant 11-year old chestnut mare Duela (by Dimaggio x Alabaster) are provisionally ranking third with a test that earned them 70.000%. The duo failed to impress in the trot work. The mare lackd self carriage and push from behind and was quick and earth bound in the lateral movements. However the pair pushed up its scores considerably with a well regulated walk and very consistent canter work. 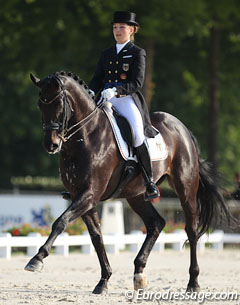 Last year's European kur bronze medal winning Florine Kienbaum and her gorgeous 11-year old Oldenburg bred Don Windsor (by Don Cardinale) slotted in fourth with 69.500%. The trot work was solid with strong lateral movements, but in the extensions the black hollowed his back and could have shown more elasticity and swing. There was some loss of rhythm in the first trot extension and one flying change was quite late on the marker. Kienbaum's and Piotrowski's scores combined are putting team Germany in the lead of the Nations' Cup with an average score of 71.290%. The Netherlands is in second place with an average of 69.566%.

The Swedish team is ranking third in the Nations' Cup with an average score of 67.382%. Ellinor Magnusson contributed the largest chunk of points to that score thanks to her 68.447%, which is now placing her fifth. Aboard her 9-year old Swedish bred Pixar (by Prestige x Epson), Magnusson took a great start for Sweden with an appealing test. Her mark was added to Anna Drugge's 66.316% score on Stroller (9th so far).