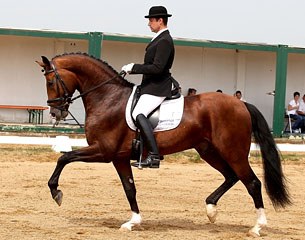 The 5-year old San Primero and the 6-year old Don Cismo were the winners of the small Bundeschampionate qualification classes held at the Thuringian Regional Championships in Grabsleben, Germany, on 7 - 9 June 2013. Only eight horses showed up to contest the L- and M-level test and three were able to qualify for the Bundeschampionate.

The 5-year old division was won by Stefan Puschmann aboard Quadriga Stud's San Primero (by San Amour x Donnerhall). The combination scored 8.0 and referred Alexandra Giebel on the Hanoverian Cookie Boy Romancier (by  Concetto x Falkland) to a second place with 7.5.

In the 6-year old division Puschmann also pushed for power and won the class on Quadriga Stud's Oldenburg licensed stallion Don Cismo (by Diamond Hit x Campari) on a staggering 9.0, which is the second highest qualification score achieved by a 5-or 6-year old young dressage horse this season. The duo got9 for trot, 8 for walk, 9.5 for canter, 9 for submission and 9.5 for general impression. Don Cismo is a full brother to the Australian owned Grand Prix horse Diamantina. Marion Loew and Danccini (by Don Crusador) were second with 8.1.