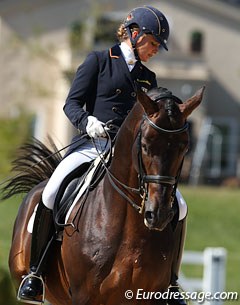 German Olympic team silver medalist Dorothee Schneider sustained a head injury at the 2013 CDI Mannheim on Thursday 2 May 2013. The Framersheim based rider was knocked against the head by her stallion Kaiserkult during the vet check.

Schneider presented her 15-year old Trakehner licensed stallion Kaiserkult (by Van Deyk x Gajus) at the job but the dark bay stallion spooked, reared and knocked his front leg against his owner's head.

Schneider was transported to the hospital where the doctors had to stitch up a laceration on her head. Schneider had to stay in the hospital in observation until Friday evening.

Due to the injury Dorothee was forced to cancel her start in Mannheim with Kaiserkult but she might still compete on Sunday in the Prix St Georges Special.