Classical Training: Over the Back: Supple and Light vs. Tense, Tight, Held 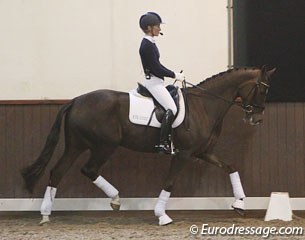 A common pre-occupation in the sport of dressage is to look if the horse is "over the back", while failing to check for all the other crucial foundation points that will allow the horse to also show lightness in front.  Is it not better to have a horse going in lightness and make a couple of mistakes; which is what the judges at London said about Valegro's test at the Olympics.

While lower level judges can easily recognise a technical mistake, I wonder if they recognise lightness because do they ever see it these days, in the lower and indeed the higher levels? At what point in the young horse's training do we lose sight of lightness and push for 'throughness'? Where does it go wrong ? At which level do the judges start to get it wrong.? Can they recognise at medium level if a horse is on the right way?  It is in the lower levels that it starts as a horse can be already stuffed by the time it gets to PSG?

Four-star judge Angelika Froemming contends that a horse is through, working over the back when the back is elastically swinging. "The impulsion from the hind legs of the horse will be flowing through the whole body, creating an elastic swinging/ working back connected to a supple poll, so that the horse is mouthing the bit and steps into the contact by its own accord," said Angelika.

Does this also mean then, that the horse is engaged? According to Angelika the better the hindquarters are elastically stepping or jumping towards the center of gravity – without being tense – and the more the horse is swinging in the back, the more the horse is engaged.  "It is important that the forward tendency of the hind legs is dominating and not only the climbing, high raised tendency. That might lead to a lack of groundcover," said Angelika. "The origin and the motor of engagement are the hind legs and not the front legs." 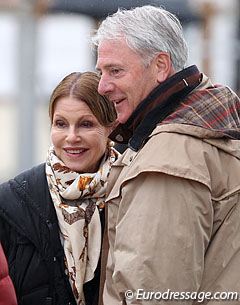 Trainer Jan Bemelmans agrees, believing that if a horse is through, or is working over the back, then the horse is definitely engaged! "And in a concentrated communication with his rider," Bemelmans added. "It means that the horse is using his entire body, but his looseness will depend on  the horse's natural ability to balance his own body."

So is a "through" horse, or a horse that is "working over the back" also in self-carriage? "Most of the time yes, it is the way it should be," Fromming explained. "Self-carriage is something we are asking for because it is a sign of  ease, willingness and submissiveness of the horse. The training should be that effective, that the horse steps into the contact by it´s own accord."

If a horse is being held up by the rider's hand, then most of the time he cannot be working over the back because, according to Angelika, this changes the outline of the horse by riding from the front to the back and will block the flow of energy coming from the hindquarters. "A horse cannot be over the back if the rider is holding the horse in front because in this case the shape of the horse will be formed by the rider's hand, and it will become a  “hand ridden" horse," Fromming stated. "This way of riding often leads to a tense back and a tense horse."

So is this easy to detect, the difference between a through and light horse, and a tense held horse? Bemelmans pointed out that not every professional dancer gives the same expression as another doing the same move. So a horse can complete the same exercise, in the correct way, but give a different impression, according to health and technics. However, Jan also stressed that the nose and poll position can be judged easily, as it is technically well defined! "The nose must be in front and the poll at the highest point," he said. "The horse must show yielding of the poll, forward thrust and carrying power, all of which need to be experienced and felt to understand and see." 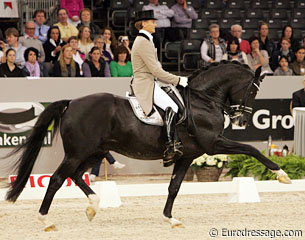 The tricky part is then not only in detecting the horse in swinging self-carriage, but also awarding it above a horse that performs the test correctly, but in an incorrect way! "Proper dressage is the result of well trained basics. This means the gymnastics of dressage, loose, soft, supple, light," Jan declared. "A horse without basics that performs the movements, is just a circus horse, and while certainly very entertaining, the rider is just training the tricks."

Angelika added that a well trained horse gets a lot of high scores during the test because of the overall picture and the solid basic training, so that little mistakes at times or even one big mistake in one exercise are not so important.  "The horse, not enough engaged, not through, not supple enough, never gets any very high marks, because the general good quality of the submissiveness of the horse is missing," she explained.

So the future of dressage lies in training the basics, putting in the hard yards, getting it right, not settling for second best, aiming for true lightness and engagement, and above all allowing our horses the freedom of movement that will lead to a free and happy athlete. "Everybody is obliged to develop his own feeling and eye for the personality and smooth action of the animals we use, but this takes time, experience and knowledge," Bemelmans declared.  "Lack or loss of the correct interest and knowledge will cause the damage and suffering of our horses.  Lets go for harmony and happiness in 2+4 legs."