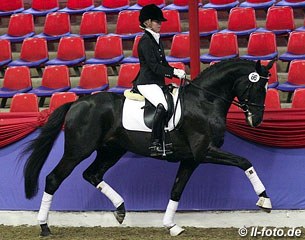 The Oldenburg bred Scuderia (by Sir Donnerhall I x Escudo) became the highest scoring dressage stallion at the last German Stallion Performance Test of the year 2012. The 30-day testing concluded on 19 December 2012.

Bred by Fiona James and Nicola McGivern in Great Britain and owned by Ingo Pape, Scuderia stood out at the licensing, being one of the top performance stallions in the very first under-saddle Stallion Licensing according to the new formula held in Oldenburg in the spring of 2012.  The black stallion scored a total of 8.93 points. He earned 9s for character, 9 for trot, 8 for canter and 8.5 for walk. The guest judge rider gave him a 10 for rideability. His jumping earned him a mere 5 though.

Two stallions tied on second place with 8.35 points: the 2011 Oldenburg licensing champion For Romance (by Furst Romancier x Sir Donnerhall I) and the 2011 Mecklenburger licensing champion Don Frederic (by Don Frederico x Wolkentanz). Bred by Paul Schockemohle and owned by Dressage Performance centre Lodbergen, For Romance scored  9 and 8.5 for character,  9 for trot and canter, and 7.5 for walk. Don Frederic, who is owned by Ann Kathrin Linsenhoff, scored  9 and 8.5 for character, 9 for walk and trot, 8 for canter and he got 9.75 from the guest judge rider.  For jumping he got 6.5.

Other well performing stallions were Fiderdance (by Fidertanz) with a total score of 8.20 and the Belgian owned Rhinelander stallion Special Agent Amour (by San Amour x Poliduktus van de Helle) with a total of 8.11.