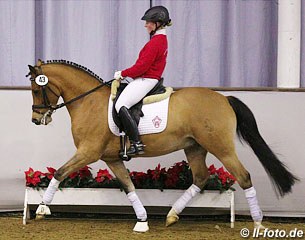 The 5-year old black pony stallion Nuno became the price highlight of the first ever exclusive pony auction held at the Westfalian equestrian centre in Munster-Handorf, Germany, on 2 December 2012.

The top selling pony of the auction was Nuno (by Nabucco R x Van Gogh R), which is bred by Christel Noltmann-Kroger and owned by Helmut Habermehl. Nuno is a licensed stallion and was Bundeschampion in 2012. He sold to Canadian Carina Krahn for 43,000 euro.

The third best selling pony was Lightning Boy von Holsteinberg (by Coelenhage's Lord x Principal Boy), an L-level trained and competed pony which has finished 8th at the 2010 Bondeschampionate. It sold for 32,000 euro to a local buyer.

The most expensive licensed pony stallion was the third placed stallion of the licensing, a bay stallion by Dumbledor x Notre Beau. Bred and presented by Georg Tenkleve, he sold for 13,000 euro.