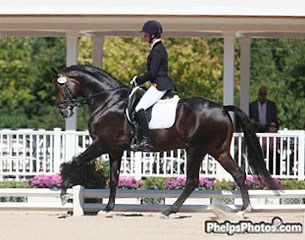 The United States Equestrian Federation has released the final rankings containing the names of the horses which are qualified to compete at the 2012 World Young Horse Championships in Verden, Germany, on 1 - 5 August 2012. The U.S.A. is eligible to send two horses per age division and a third reserve horse can be named as well.

U.S. owned horses had to score 7.8 on average or higher to be nominated for Verden. Two qualifiers were held this year. One on the West Coast, where only three horses competed, and a bigger one on the East coast in Leesburg, VA, where a larger group attended the event.

German based Jennifer Hoffmann qualified her horses by riding at the Bundeschampionate selection trials in Unna-Massen and Coesfeld.

In the 5-year old division, the top ranked horses are:

In the 6-year old division, the top ranked horses

" We did it ! Florentinus and I have qualified for the World Championships of Young Dressage Horses. This will be our second year representing USA," said an ecstatic Jennifer Hoffman. "I am so very happy with the amazing progress this wonderful stallion has made, I am looking forward to the Championship in August."