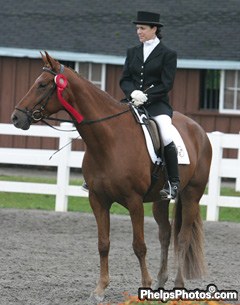 Dressage at Devon has announced the addition of a 3-year-old Sport Horse Prospect Championship. The champion will be named based on the combined score from the 3-year-old in-hand and Materiale classes.

“This new championship will provide a “bridge” between the 3-year-old in-hand and Materiale classes in dressage. We are very proud to introduce it at the 2012 Dressage at Devon,” said Melanie Sloyer, Breed Show Chairperson.

"The 3-year-old championship award being offered at Dressage at Devon 2012 is an exciting new concept. The 3-year-olds already competing in in-hand and Materiale classes will have their scores combined to determine an overall 3-year-old Sport Horse Prospect champion.

This is a great opportunity for these horses to shine in the fall of their 3-year-old year. I look forward to seeing the outcome of this new championship award,” said Kristi Wysocki, a WSEF ‘S’ Dressage Judge and ‘R’ Dressage Sport Horse Judge and who currently serves as the USDF Sport Horse Committee Chair.

Scott Hassler, the USEF Young Horse Coach and former chair of the USDF Sport Horse Committee explained. “This new championship – and the reason I’m behind the program – is that the more information we have about a horse the better. So seeing a horse being ridden in addition to the conformation standards judged in the in-hand classes offers a more complete picture. I think it’s great that Dressage at Devon offered to do a test program this year. I don’t like pushing a horse but Dressage at Devon provides a natural platform since these horses will already be there Devon for the breed show.”