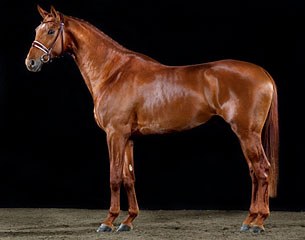 Zaladin MI became the winner of the dressage horses at the 2012 Swedish Warmblood Stallion Performance Testing which was held at Flyinge State Stud from 25 February till 3 March 2012. The winner was announced at Scandic Star hotel ln Lund on Saturday evening.

The 4-year-old Danish warmblood registered Zaladin MI is by Zack out of Labial MI (by Solos Landtinus). He is bred by Bo Steen Larsen and is owned by Jan Brink's Tullstorp stable in partnership with the Hannell family. The chestnut stands 176 cm tall!

Guest judge riders Isabell Bache and Emmelie Scholtens assessed the stallions under saddle. Bache said about Zaladin MI that he was "slightly unsteady in the contact" but that he was "strong, electric and very rideable with good potential. The canter is uphill." Scholtens added that he was "really balanced despite being so big. He has a good balance in all three gaits but maybe could have a bit more supplenes. The horse is really talented for the collected work. It's a little harder to make him go forward."

More info and photos of the 2012 Swedish Performance Testing here.