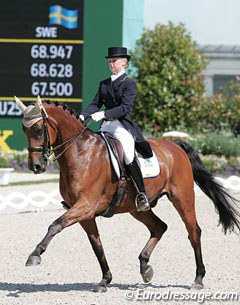 The future of Swedish dressage is of course our young riders and our young horses. The Lövsta Future Challenge Cup is a new cup, consisiting of five qualifying competitions and a final, ridden in Grand Prix.

Antonia Ax:son Johnson started Lövsta Stud Farm in it’s existing form about ten years ago and the one of the goals was education  and refinement of promising young Swedish riders and dressage horses. From that ambition grew ”Lövsta Academy”, which is a way of giving young and talented dressage riders the possibility of developing their riding skills and horsemanship at Lövsta Stud Farm.

"Swedish dressage is of a very high international standard. But we need more horses and riders for the future. At Lövsta, Tinne and I have invested in the very best young talents in what we call “Lövsta Academy”. When Peter and Louise approached us with the initiative for Lövsta Future Challenge I felt that it worked perfectly together with our ambitions at Lövsta," says Antonia Ax:son Johnson.

It’s a long term commitment over three years and Antonia Ax:son Johnson and Lövsta Stud Farm takes on a sponsorship that adds up to a total of 1,5 million SEK. A sum rarely seen in Swedish dressage.

The cup Lövsta Future Challenge is divided into two sections; “U25” for riders up to 25 years, where the riders can compete on horses of all ages, and “Future GP” for horses up to the age of 11 years, which can be ridden of riders of all ages. Five qualifying competitions leads up to the final, and the three best results in the qualifiers are what counts. The final is held in the Ericsson Globe Arena, during the Stockholm International Horse Show in the end of 2012.

"To ride in the Ericsson Globe is a dream for many riders and we think that Lövsta Future Challenge is a fantastic opportunity for our young riders and our young horses to get a taste of the atmosphere at a really big competition. It’s also ideal for young riders to compete on experienced horses and young horses being matched by experienced riders. We think this cup is a good way to reach that goal," says Louise “Lussan” Nathhorst, one of the initiators behind Lövsta Future Challenge and senior advisor at Lövsta Stud Farm.

"I think it’s an extra bonus that the trainers get involved and are recognized in Lövsta Future Challenge. The trainers of the winning equipages in the final will be acknowledged and rewarded with an special prize. This will be an incentive and a challenge for us trainers to further develop Swedish dressage," says Peter Härnstam, dressage trainer and initiator of Lövsta Future Challenge.

The prizem oney for the Lövsta Future Challenge Cup is a total of 400 000 SEK per year, a big step forward for the prizemoney in Swedish dressage. The two winners in the final will get 40 000 SEK each.

The first qualifier will be held during spring 2012 and the final is held at the Ericsson Globe 2012 during the Stockholm International Horse Show. The show is the biggest indoor event in equestrianism in the world, if you look at the amount of visitors per day. World Cup competitions in dressage and four-in-hand as well as international showjumping are held every year in the arena, during three days in late November.