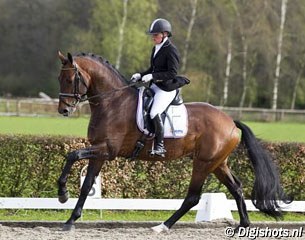 On Tuesday 15 June 2011, the Dutch horses in the running for a spot on the Dutch team for the 2011 World Young Horse Championships in Verden presented themselves once more in front of the selection committee in Ermelo, The Netherlands. The combinations had to ride the Finals test and afterwards were given training advice by selector Johan Hamminga.

Since the selection trials in April drop outs so far in the 5-year old division are Thamar Zweistra with Believe RT (by Rubiquil), Fieke Houwen on Be Special (by Special D) and Vienna Romp on Bolero D (by Van the Man). In the 6-year old division drop outs are Thamar Zweistra on Auctor (by Rubiquil), Engie Kwakkel on Anoraline (by Samba Hit), Floor Droge on Astrid Sollenburg (by OO Seven) and Petri Bax on Avatar (by Negro).

The remaining horses were invited to come back for the fifth selection day on Tuesday 28 June when they will ride the Finals test again, get training advice as well be video taped.

The final selection day will be on 12 July. On that day the horses have to perform the preliminary test and get once more training advice from Hamminga. The definite team will be announced after all the combinations have been reviewed by the selectors.

Currently vying for a Verden entry ticket are: