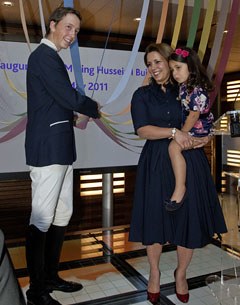 The FEI, world governing body for equestrian sport, has today officially opened its new headquarters in Lausanne (SUI), the Olympic Capital.
Almost 200 guests attended the ceremony at HM King Hussein I Building, which has been named after the FEI President’s late father HM King Hussein I of Jordan, a leader committed to peace and democracy and lifelong lover of horses and sport.

HRH The Infanta Doña Pilar de Borbón, former president of the FEI (1994-2006), attended the inauguration alongside HRH Princess Lalla Amina, Chairperson of the Royal Moroccan Federation for Equestrian Sports and member of the international Advisory Council of Special Olympics.

They were joined by International Olympic Committee members, representatives from other International Federations and the federal and local Swiss authorities.

The inauguration of the new headquarters was timed to coincide with today’s FEI Extraordinary General Assembly, so that attending National Federation representatives could also join in the celebrations.

The FEI’s new headquarters, which were gifted to the Federation by FEI President HRH Princess Haya in 2007 following a personal fundraising effort, are conveniently located close to the International Olympic Committee and other international sports federations.

It has been written into the FEI Statutes that the new FEI headquarters building will always house the Federation’s offices. In 2008, the building was thoroughly renovated in accordance with the Swiss MINERGIE® construction standard for environmental responsibility, which reduces energy consumption by 25 per cent. Only two per cent of renovated buildings in Switzerland meet the high Minergie standards.

As well as housing offices for its 62 employees and conference facilities for its 133 National Federations, the new headquarters also has a state-of-the-art interactive gallery showcasing equestrian sport.

The interactive gallery will be open to the general public to help people of all ages discover or re-discover human and equine athletes whose talents have marked equestrian history and inspired young riders, drivers and vaulters around the world.

“The building we are inaugurating today has been designed to serve our wonderful sport,” explained FEI President Princess Haya. “I also feel an immense sense of pride knowing that this building carries the name of my late father and hope that this serves as a constant reminder to all of us who work at the FEI of a unique statesman, whose entire soul was devoted to the service of his people.

“Our new headquarters will play a key role for the FEI and our National Federations over the coming years. It will be the environment in which important discussions take place and fundamental decisions are taken as we continue our mission to advance the orderly growth of equestrian sport worldwide, while ensuring that the welfare of the horse and a level playing field remain at the centre of all that we do.”

Khuan Chew, founder and design principal of London-based architectural firm KCA International Ltd, worked in close collaboration with Swiss-based architect Hervé de Rham and interior designer Siavosh Adeli (SUI) to transform the building, which was built in the 1960s. The FEI staff have been housed in the new offices since late February.

The reception for the inauguration was catered by organic specialist Gilles Wannaz and his team based in the town of Cully, which sits on the edge of Lac Leman in Switzerland’s famous Lavaux wine growing region.