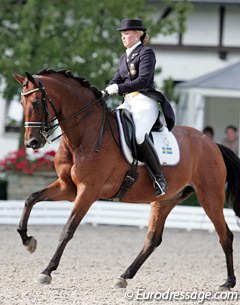 Swedish young rider Johanna Due Boje got injured in a riding accident at the Stable Van Grunsven in Erp, The Netherlands, where she is training and working for Anky van Grunsven and Sjef Janssen.

On Wednesday afternoon 15 December Due Boje was riding her 9-year old young riders' horse Don Corleone. The bay gelding was feeling fresh and frolicy and bucked. "I can normally stay in the saddle but not this time," Due Boje joked.

Johanna fell off her horse and smacked on the ground. She was transported to the hospital with severe lower back pain. The doctors initially gave her mixed messages. First they said she sustained a fracture in her back, then the diagnosis appeared less severe and could simply be a bruised back. On Friday morning Due Boje returned to the hospital for another appointment.

"They still do not know if I have a fracture in my back, but if it is it will be very small," Due Boje told Eurodressage. "In any case, with or without fracture, it's six weeks rest for me."

Fortunately Due Boje is not bedridden. "I can walk around and if i take small, quiet steps its no problem," Due Bojeadded. "It actually hurts more to sit or lie down."

Due Boje has been based at Anky van Grunsven's since 2008 and is a working student there. Besides Don Corleone, she also rides an 8-year old German bred offspring by Rotspon x Davignon.