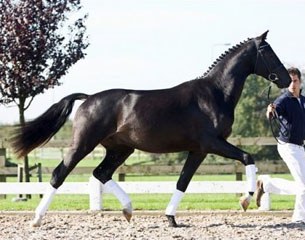 The first edition of the Equine Elite Young Stars, a special auction dedicated to the sale of young stallion prospects, became a real success. The 2,5 year old Douglas (by Vivaldi x San Remo) sold for 155,000 euro.

Dutch stallion owner Joop van Uytert and the Equine Elite Foundation teamed up for this new auction which was held on Saturday 13 November 2010. Forty horses were sold of which thirty-two were young colts.

Many stallions sold abroad via telephone to countries such as the U.S.A., England, Germany and France. Caprice, the 3-year old stallion by Johnson x Houston, sold for 36,000 euro.

There was also a keen interest for some mares. The renowned brood mare A Special Poetin (by Jazz out of Poetin (by Sandro Hit x Brentano II), which is in foal to Totilas, sold for 68,000 euro to a Dutch buyer. A Special Poetin was previously owned and offered for sale by Reesink Horses.  The 5-year old mare Riva (by Real Diamond x Davignon) sold for 30,000 euro.

The average price for a horse at the Equine Elite Young Stars was approximately 20,000 euro.

Back to the Equine Elite Index